Warning: ftp_pwd() expects parameter 1 to be resource, null given in /homepages/44/d793335463/htdocs/pro/wp-admin/includes/class-wp-filesystem-ftpext.php on line 230
 TRADEMARK REGISTRATION IN THE LIGHT OF SLOGANS | Company Vakil

TRADEMARK REGISTRATION IN THE LIGHT OF SLOGANS

Home TRADEMARK REGISTRATION IN THE LIGHT OF SLOGANS 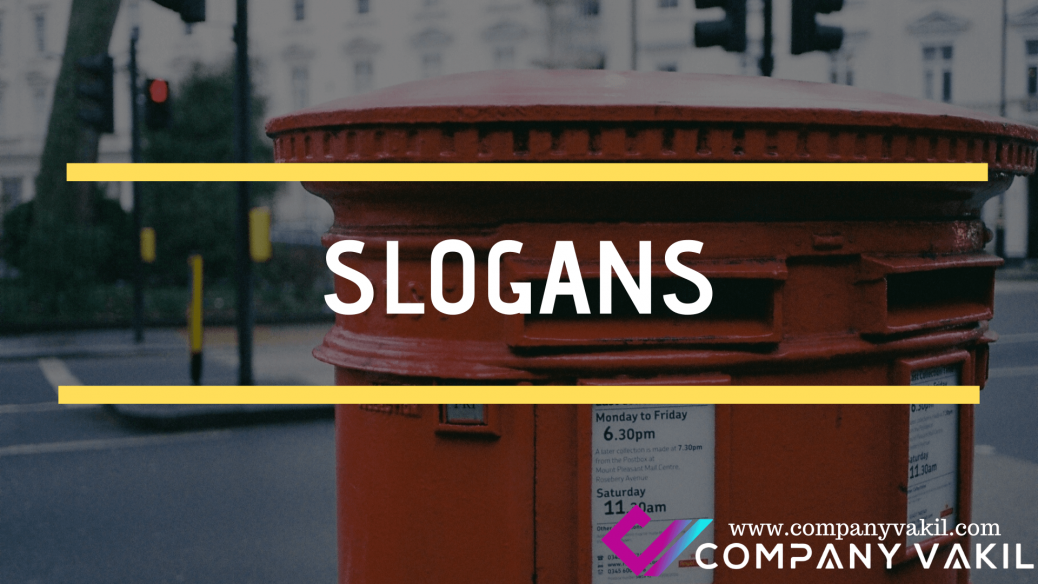 According to the Trade Marks Act, 1999, trademark means “a mark capable of being represented graphically and which is capable of distinguishing the goods or services of one person from those of others and may include shape of goods, their packaging and combination of colours.” Slogans, as defined by dictionary, means “a short and striking phrase used in advertising.” The word trademark is not just limited to just marks and logos but also includes words and phrases that help people distinguish between one brand from another.  For example, we all are familiar with the tag line “Just do it” of the Nike brand. This phrase is trademarked by the Nike Company and if it would not have been so, people all around the world would be using that phrase and it wouldn’t be easier to distinguish Nike from other competitive brands in the market.

The Draft Trade Mark Manual 2015 by the Trade Mark Registry includes slogans in the list of things that can be registered as trademark. It gives an idea about the registration of slogans as trademarks.

One or more words, constituted as a slogan mark, may be registrable provided it is distinctive per se or has acquired distinctiveness. ‘Slogans’ serving a promotional function will be objectionable because average consumers are not in the habit of making assumptions about the origin of products on the basis of such slogans. Plain descriptive phrase of a slogan is always considered non-distinctive. Like “Never clean your shower again” is to be objected because it describes in plain language the intended purpose of the goods. The mark “The best way to predict the future is to create it” (for technology related services) can be accepted because this is neither considered to be a normal way of designating these services nor to be a commonplace phrase. This is the part dedicated to slogans in the manual of 2015 but the most descriptive guidelines related to registration of slogans can be seen in the Manual of Trade Mark, 2009. Let’s give a look at it.

According to the Manual, the following factors related to slogans will be considered before the registration of the same:

Some allowance must be made for the fact that it is customary to use shortened phrase when promoting the goods or services.

Ambiguity means something that can be interpreted in more than one ways. The ambiguity may enhance the prospects of registration. However, it is possible that ambiguity in a sense may render the mark misleading and deceptive as to its characteristics to entail objection.

Straightforward value statements that could apply to any undertaking are devoid of any distinctive character and thus cannot get registered. For example, “we encourage innovation to meet challenges”.

These types of slogans are considered to be non-distinctive particularly for services and can also not get registered. For example, “You can do it with us” for driving schools or “go for it” for training courses.

Straightforward statements about customer service that could not apply to any undertaking are also devoid of any distinctive character which renders is not eligible for registration. For example, “Putting customer’s first”.

The mark “Say it with champagne” is composed of a well known advertising strap line “Say it with…” followed by the name of goods (champagne). This mark therefore fulfils a purely marketing function, i.e. an invitation to the public to send a message through gift of champagne.

Slogans such as “I love sleeping” or “Here comes trouble” are often used to decorate goods, particularly clothing like t-shirts, sweatshirts or baseball caps. In this context, consumers are unlikely to perceive this type of slogan as a sign of trade origin. When seen, they may seem to be as a personal statement by/about the wearer/user rather than indicating the trade origin of the product. Slogans which are likely to be seen as such will therefore be open to objection under the provisions of the Trade Marks Act, 1999. The Examiner should see whether the phrase applied for is indeed used as trademark by calling for evidence.

In Reebok India Company vs. Gomzi Active, the Karnataka High Court held that a person claiming the benefit if distinctive usage must establish that its slogan has developed secondary meaning and goodwill. The court considered whether the slogan “I am what I am” had acquired distinctive character as a result of Gomzi’s use. It accepted Reebok’s contention that, as the slogan was a generic phrase, it had not acquired distinctive character in relation to Gomzi’s goods. In setting aside the temporary injunction issued by the trial court, the High Court observed that there was no evidence to infer a likelihood of confusion among consumers, as the registered trademarks of the two parties were totally different and mere use of the common words “I am what I am” would not mislead consumers.

In yet another case, High Court of Delhi’s division bench considered the use of slogan in relation with energy drinks. The plaintiff was using its registered slogan “Rehydrate Replenish Refuel” in conjunction with the trademark Gatorade. The defendant was using the expression “Rehydrates fluids; Replenishes vital salts; Recharges glucose” in relation to energy drink Glucon D. The court held that in the sports and energy drink market, words or expression akin to the plaintiff’s slogan are not only common, but also necessary to describe the characteristics or attributes of such products. Therefore, notwithstanding the fact that a party has obtained registration; If a registered slogan mark or similar expression is used to describe the characteristics of a product within the meaning of Section 30 (2) (a) of the Trade Marks Act, 1999, the user is not guilty of infringement.

Thus, it is clear that for a slogan to get registered under the act, it needs to be non-descriptive, and even if it descriptive, it should not have words or phrases which are common to the trade.