Warning: ftp_pwd() expects parameter 1 to be resource, null given in /homepages/44/d793335463/htdocs/pro/wp-admin/includes/class-wp-filesystem-ftpext.php on line 230
 REJECTION OF TRADEMARK APPLICATION | Company Vakil 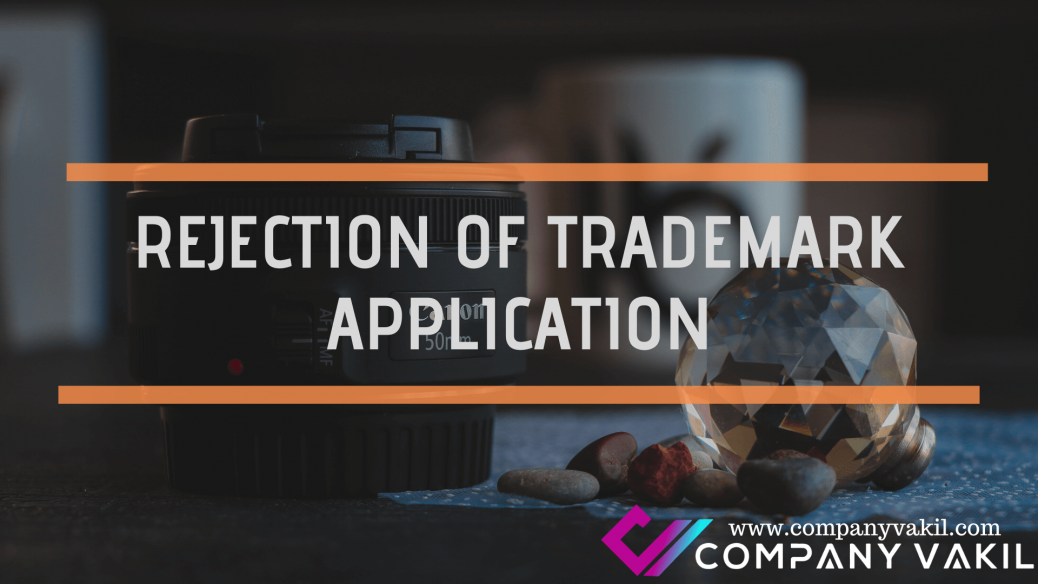 If you have filed an application for registration of a trademark, it does not necessarily means that it will get accepted right away, or get accepted at all. The application for registration of a trademark can be rejected if, after the examination of the application by the examiner, it falls under the criteria of any of the grounds mentioned in Section 9 (Absolute grounds for refusal) or Section 11 (Relative grounds for refusal). In this article we will look into both absolute and relative grounds of refusal for trademark registration in detail.

Absolute Grounds For Refusal Of Registration

Section 9 (1) of the Trade Marks Act, 1999 sets down the following absolute grounds for refusal of registration:

Trademarks which consist exclusively of marks or indications which may serve in trade to designate the kind, quality, quantity, intended purpose, value, geographical origin, the time of production of goods or rendering services or other characteristics of goods or service.

The expression ‘may serve in trade’ means that there exists a reasonable likelihood that other honest traders will wish to use the trademark in question to designate characteristics of the goods/ services.

The expression ‘kind’ indicates size and type for example ‘large’, ‘extra large’, ‘old’, ‘new’, etc. This would be objectionable in respect of any goods/services.

Words which refer directly to the use of goods or which describe the consequences of providing the service are not acceptable. For example: ‘rust free’ for paints, ‘slim and fit’ for slimming preparation, ‘twist and curl’ for twisting action for curling the hair, would be open to objection.

Name of places with a large population may also attract objections.

Trademarks which consist exclusively of marks or indications which have become customary in the current language or in the bond fide and established practices of trade are subject to be objected. The expression ‘trade’ means the trade concerned with the goods/services covered by the application.

When a mark is in common use in the trade, or when it is open to the trade to use the mark, is said to be ‘common to trade’ and it ceases to be a trademark of a single source. For example, names of flowers for ‘agarbatti’, tobacco products, etc.

A trademark which offends Section 9 (1) may still be registered if it can be shown that on the date of the application, the mark has in fact acquired a distinctive character as a result of the use made of it.

Relative Grounds For Refusal Of Registration

A mark is identical with the trademark where it reproduces without any modification or additions, all elements constituting the trademark, or where, viewed as a whole trademark, it contains differences so insignificant that they may go unnoticed by an average consumer.

The term similarity of marks is to be construed as “deceptively similar”, which means so nearly resembling the other mark so as to deceive or cause confusion.

For likelihood of confusion to exist, it must be probable. It is not necessary that actual confusion has arisen or should arise in the mind of average consumer or the public.

The three most relevant factors for examination of trademark applications will usually be:

General rules for comparison of marks:

Additional precautions required where the goods are medicinal preparations

“Exact judicial scrutiny is required if there is a possibility of confusion over marks on medicinal products because the potential harm may be far direr than that in confusion over ordinary consumer products”.

The search of same/ similar trademarks is performed through the Trade Marks System. The system enables the examiner to make search with three modes:  word mark search, phonetic search and device mark search. The system automatically selects the class for search of earlier trademarks as per the application filed.

All trademarks consisting of any figurative elements are codified as per the International Classification of the Figurative Elements of Marks (commonly known as the ‘Vienna Codification’). In this mode, the examiner has to put the correct Vienna code and the system will fetch all trademarks bearing that Vienna code. In case same/similar earlier marks belong to the applicant himself, the examiner selects such marks as associated marks.

If an application for registration of trademark is filed and it comes in the examination report, prepared by the examiner, that it meets any of the grounds for refusal of trademark as mentioned above, the application will be rejected or will be subjected to objection.