Warning: ftp_pwd() expects parameter 1 to be resource, null given in /homepages/44/d793335463/htdocs/pro/wp-admin/includes/class-wp-filesystem-ftpext.php on line 230
 OPPOSITION OF TRADEMARKS | Company Vakil 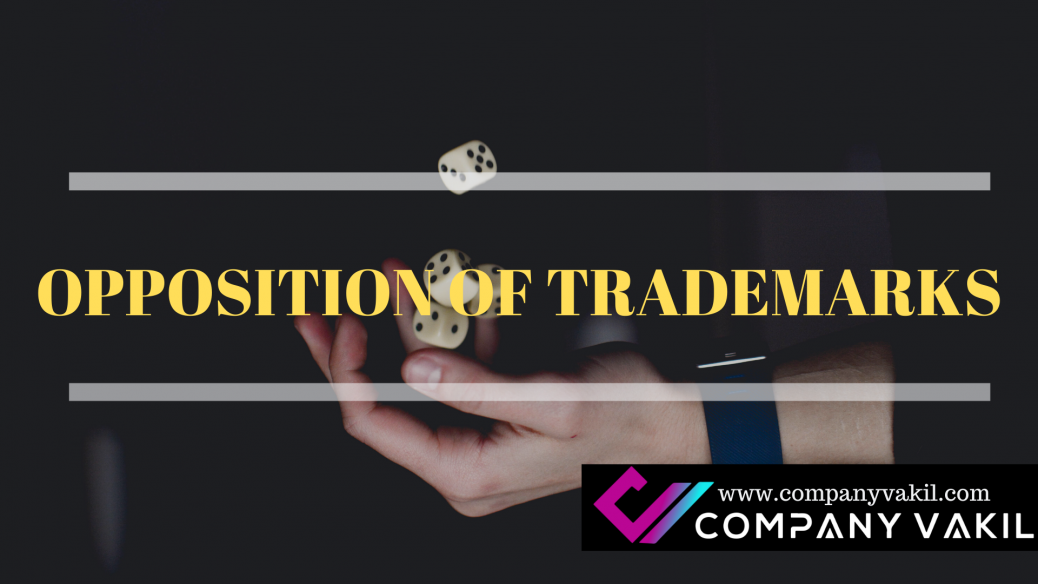 After advertisement of a trademark in the trademark Journal, a period of four (4) months is given in which any person can oppose the registration of trade mark. This can only be done before the Registrar and not to the court or Appellate Board. If the opposition is successful, the registration of the trade mark will be refused. If it fails, the mark will be registered.

Who may oppose the Application?

“Any person” may give a notice of opposition to the registration of a trade mark. He does not need to have any commercial or personal interest in the matter or a prior registered trade mark owner. The question of bona fide opponent does not arise.

An opposition is ordinarily based on any one or more of the sections of the Trade Marks Act, 1999-

A notice for opposition should be filed within four (4) months from the date of advertisement or re-advertisement of an application for registration of trade mark.

Opposition is filed as per prescribed form which is TM-5 and the fee to file an opposition against any prescribed mark is two thousand seven hundred rupees (Rs. 2,700) for e-filing and three thousand rupees (Rs. 3,000) for physical filing.

Verification of notice of opposition

The notice of opposition shall be verified at the foot by the opponent or by an authorized person who is acquainted with the facts of the case. The person verifying shall state, specifically by reference to the numbered paragraph of the notice, what he verifies of his own knowledge and what he verifies upon information received and believed to be true.

The verification shall be signed by the person making it and shall state the date and place at which it was signed.

Filing of counter statement by the applicant

Evidence is to be given on affidavits. The Registrar, in his discretion, allows oral evidence also. The Affidavits shall be duly stamped, be headed in the matter or matters to which they relate, be drawn up in the first person, be divided into paragraphs, be consecutively numbered and each paragraph shall be confined to one subject. Every affidavit shall state the description and the true place of abode of the person making the same, bear the name and address of the person filing it, state on whose behalf it is filed.

Where two or more persons join in an affidavit, each of them shall depose separately to such facts which are within his personal knowledge and those facts shall be stated in separate paragraphs.

Affidavits shall be taken-

The person before whom an affidavit is taken shall state the date on which and the place where the same is taken and shall affix his seal, if any.

Any evidence in support of opposition must be filed within two (2) months from the date of the receipt of a copy of the counter statement. The Registrar may extend the period not exceeding one month in aggregate.

The copies of the evidence filed by the opponent must be delivered by him to the other party and a written intimation thereof must be given to the Registrar.

Filing evidence in reply by opponent

The Registrar may, at any time, give leave either to the applicant or the opponent to submit any further evidence upon such terms as to costs or otherwise as he may think fit. Further evidence may be filed by filing an Interlocutory Petition (IP) with a fee of rupees two thousand and five hundred (Rs. 2,500). Hearing shall be fixed on IP. The hearing Officer shall hear submissions of both parties for or against the IP and shall dispose of the petition as per trademarks law and practice.

Copies of exhibits of affidavits, if any, shall be sent to the other party on his request and at his expense, or, if the same cannot conveniently be furnished, the originals shall be left with the Tribunal section of the office of the trademarks registry where they can be inspected by the other party. The original exhibits shall be produced at the hearing unless the Hearing Officer otherwise directs.

Request for extension of time

If the Registrar is satisfied, on application made to him in the prescribed manner and accompanied by the prescribed fee, that there is sufficient cause for extending the time for doing any act, whether the time so specified has expired or not, he may, subject to such conditions as he may think fit to impose, extend the time and inform the parties accordingly.

Request for adjournment of hearing

A request for adjournment of hearing shall be made in Form TM-56 with fee of rupees five hundred (Rs.500).

This was the process of filing an opposition to a registration of trade mark under the Trade Marks Act, 1999.

Source: A draft of Manual of Trade Marks, Practice and Procedure