Warning: ftp_pwd() expects parameter 1 to be resource, null given in /homepages/44/d793335463/htdocs/pro/wp-admin/includes/class-wp-filesystem-ftpext.php on line 230
 EVIDENCE OF USE OF A TRADEMARK | Company Vakil

EVIDENCE OF USE OF A TRADEMARK

Home EVIDENCE OF USE OF A TRADEMARK 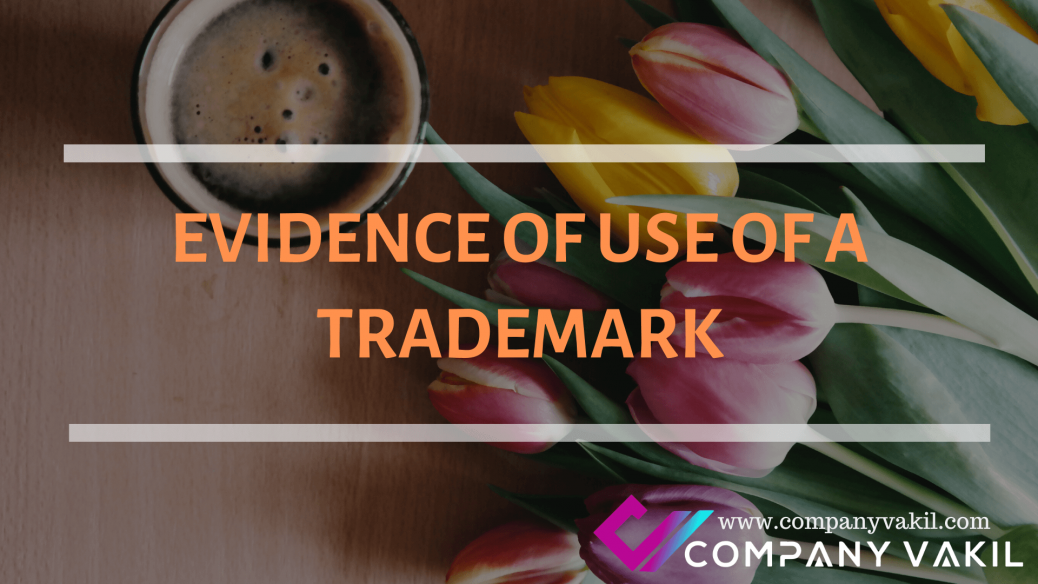 After the application for registration of trademark has been submitted, it is sent to an examiner whose duty is to check that the details of the application are correct and if not, he raises an objection for the same. Absolute grounds and Relative grounds of refusal are some of the reasons for raising an objection for registration. Section 9 of the Trade Marks Act, 1999 talks about absolute grounds for refusal of a registration of trademark and it says that:

shall not be registered.”

What is Evidence of Use?

A trademark which offends Section 9 (1) of the Act may still be registered if it can be shown that on the date of application the mark has, in fact, acquired a distinctive character as a result of the use made of it.

In any proceeding before the Registrar, evidence is given by way of an affidavit. However, the Registrar may, if he thinks fit, take oral evidence, in lieu of, or in addition to, such evidence by affidavit. In case Evidence of use of the trademark in conformity with user statement mentioned in the application, has already been given by way of affidavit of the applicant, the examiner may take this into account while raising objections.

In assessing the distinctive character of a mark in respect of which registration has been applied for, on the basis of evidence of use provided by the applicant, the following factors shall be taken into account:

The amount spent by the applicant or invested by the undertaking in promoting or advertisement of his mark is another example of evidence that can be used to show the usage of the mark. Expenditure on advertisement and promotion shows interest of the applicant. The expenditure is broken down and submitted under different categories.

The proportion of the relevant class of persons, who, because of the mark, identify goods as originating from a particular undertaking can be showed as evidence of use as well. For example, the recognition of the automobile brand Audi through its four interconnected circles. A huge portion of public recognized audi through that trademark and thus it make it a good evidence of use.

The statements from Chambers of Commerce and Industry or other trade and professional associations can also be used to show the use of trademark as they are statements from experts in the trade and can attest to the distinctive character of the mark.

Domain names are unique for every business as no same domain name is assigned to two owners. If a domain name or website is used prominently for selling of goods or rendering services, it can be shown as evidence of use as well.

The turnover of business through sales of goods or through the services provided can also be shown as evidence of use. If the turnover is great, the mark is more likely to be accepted. If the mark is used for a period of about five (5) years before the date of application, it is enough to show the use of the mark, if it is less it would depend upon the number of years and if the amount is considerable, it should be enough to support the application. It is to be kept in mind that some industries like social networking sites, cannot have sales turnover as a scale to judge the business, in these cases, other elements like number of account holders, number of subscribers, number of users can be taken in to consideration to show the usage of the mark.

If done according to the rules of the trademark, customer surveys can also work as a good tool to show the use of a mark. It can be submitted as evidence as it shows that customers or public in general knows about the mark prior to the registration of the same. Examples of survey questions which can help to understand this mode of evidence is, “What does this symbol signify to you?” or “Have you seen this logo anywhere?”

These were some ways through which an applicant for registration of a trademark can show that the mark is well-known and it has been in use prior to the application. These evidences are submitted through affidavits and after considering the same, the Registrar either accepts the mark or rejects it. The more evidence of use an applicant can submit, the more chances he has of his application getting accepted. The Trade Mark Rules 2017 prescribes the manner in which the affidavits for the evidence are to be executed. The above mentioned factors help the applicant in getting his trademark registered without much of a hustle.