Warning: ftp_pwd() expects parameter 1 to be resource, null given in /homepages/44/d793335463/htdocs/pro/wp-admin/includes/class-wp-filesystem-ftpext.php on line 230
 DISSOLUTION OF PARTNERSHIP FIRM | Company Vakil 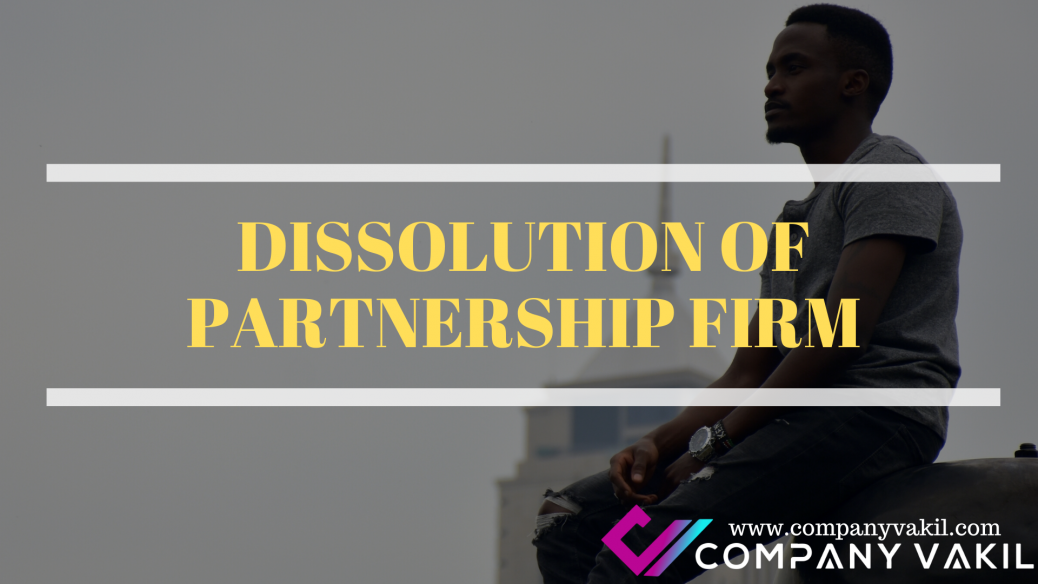 Various circumstances might occur when all the partners of a firm decide to terminate the relations between them in order for a complete closure of the firm to come in action. Such a closure of a firm is termed as the “dissolution of firm” according to the section 39 of Indian Partnership Act. Further, section 189 of Income Tax Act also states the dissolution of partnership of a firm. What this dissolution of a firm means is that it involves selling or disposing the firm’s assets, final settlements if its liabilities and accounts. The dissolution partnership deed also mentions about the ratio in which the final profit of the firm is required to be shared prior to its dissolution. Hence, any amount of money that remains in the end is distributed amongst the partners according to the ratio mentioned in the deed. This kind of termination of partnership is only possible when it is a collective decision of all the partners involved.

For a partnership firm to be able to go through a dissolution process, it is essential to first provide the registration documents. Below is an image by VakilSearch that states all the important documents which are required as proof of registration of the firm.

It is the fastest and the easiest way available for dissolution of a partnership firm as it allows the partners to actually come up with a mutual agreement when the partners collectively decide to terminate the business due to various professional or personal reasons. It also allows for the inception of such agreements when the contract specifying the partnership expires. For such an action to be taken the partnership agreement should possess a ‘Dissolution by Mutual Consent’ clause. This allows for the unity in the final decision making process hence resulting in the clause to be activated at the time of dissolution which further ensure smooth process for the same.

If the partnership business in question is the one at will then a partner is allowed to dissolute the same by producing a written notice of such dissolution and providing the same to all the other partners of the firm given that it is duly signed by the individual. A notice should be prominent and clean for proper comprehension. It also cannot be withdrawn without the consent of all the other partners. If the person giving the notification for the dissolution of the firm is at an advantage at the time of dissolution then he shall be made to still be a part of the firm until all the pending transactions are brought to an end.

The dissolution of the partnership firm may take place on the account of any of the following contingent events.

Due to certain circumstances sometimes the partnership firm is forced towards a dissolution, for instance, commission of any illegal event which eventually make it condition precedent to put a halt in the further continuance of the tenure of the firm.

Sometimes a partnership business involves family members and relatives as the partners of the firm and these kinds of relations often result in certain number of partners or even one partner to find it uncomfortable to work under the given circumstances and continue with the business partnership. In such cases, the court is given the authority to assist in the process of the dissolution of the firm. Following are certain reasons which lead to courts deciding the final step in the execution of certain business partnerships.

Some other reasons may include continuous losses and simply grounds of just, fair and equitable distribution.

The partners keep on being at risk as such to third parties for any demonstration done by any of them which would have been a demonstration of the firm whenever done before the disintegration, until open notification is given of the disintegration. Further the death of a partner, a partner who has been adjudicated as insolvent or a partner who has not been known to have been a partner, of the firm, to all the other partners of the firm, ends up retiring from the firm can be considered as grounds for holding such partners as not responsible after the date from which the partner ceases to be one.