Warning: ftp_pwd() expects parameter 1 to be resource, null given in /homepages/44/d793335463/htdocs/pro/wp-admin/includes/class-wp-filesystem-ftpext.php on line 230
 BUSINESS CONNECTION UNDER THE INDIAN DOMESTIC TAX LAWS | Company Vakil 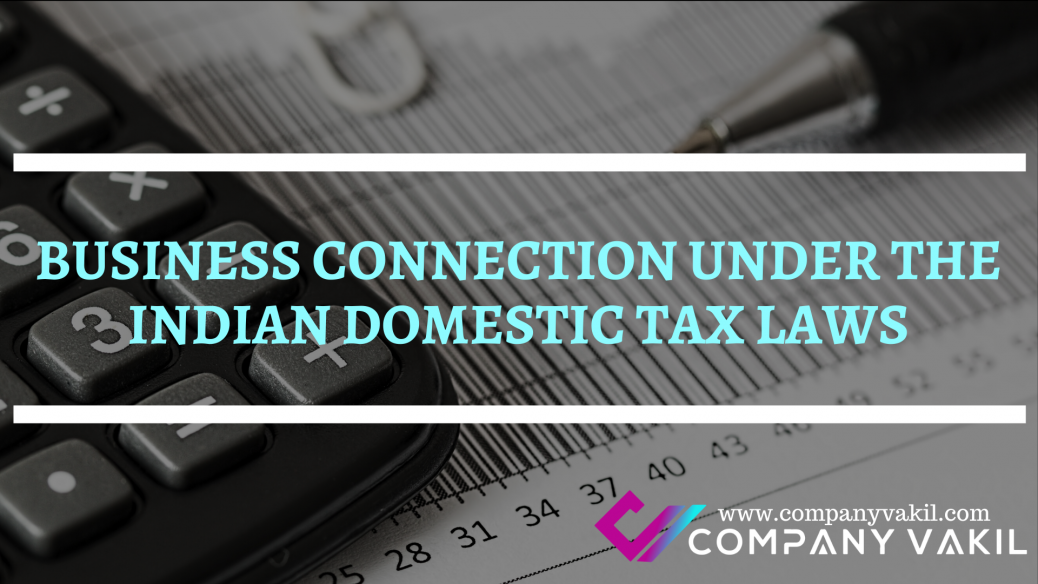 The Indian domestic tax laws have provided that all the income generated or arising in India, regardless of it being directly or indirectly earned, through or from any business connection in India shall be deemed to accrue or arise in India itself. In simple terms, any income obtained from a business by Non-Residents of India is taxable in India if the said individual has a business connection in the country. The mentioned article discuss about the Business Connection under Indian Domestic Tax Laws and the essentials information pertaining to the same. Section 9 of IT Act: Broadly speaking, business income of a foreign company or other non-resident person is chargeable to tax to the extent it accrues or arises through a business connection in India or from any asset or source of income located in India, and to the extent such income is attributable to the operations carried out in India. Certain income is deemed to accrue or arise in India under section 9 of the said act, even though it may actually accrue or arise outside India .Section 9 applies to all assesses irrespective of their residential status and place of business. Thus, only Indian income is liable to income tax in India in the case of a non-resident person. This means that a non-resident person is not liable to pay any income tax in India on his foreign income. Though an income may not actually accrue or arise in India, yet it may be deemed to accrue or arise in India.

THE CRUCIAL ANALYSIS AND OVERVIEW

The scope of business connection under the Indian domestic tax laws were similar to those provisions under the Dependent Agent Permanent Establishment (DAPE) in Article 5(5) of the Double Taxation Avoidance Agreement (DTAA) that was entered into by India with other countries. Under the said terms, if an individual acting on behalf of a Non-Resident is habitually authorised to conclude contracts for the Non-Resident. After this, such an agent would constitute a permanent establishment in the source country. However, under various cases, with the intention of avoiding a permanent establishment under Article 5(5) of the DTAA, the individual acting on behalf of the Non-Resident negotiates a contract but does not conclude the agreement. Therefore, a review was conducted by the Organisation for Economic Co-operation and Development (OECD) under the Base Erosion and Profit Shifting (BEPS) to redefine the definition of a Permanent Establishment in order to prevent the avoidance of tax payments by circumventing the existing Permanent Establishment definition according to commissionaire arrangements or fragmentation of business activities. The Finance Act,2003 has inserted Explanation 2 to section 9(1)(i)​ w.e.f 01.04.2004 to broadly explain the term ‘business connection’. After substituting the clause (a) of Explanation 2 to 9(1)(i)​ by the Finance Act, 2018, the term ‘business connection’ shall include any business activity carried out through a person who, acting on behalf of the non-resident:

(i) in the name of the non-resident; or

(iii) for the provision of services by the non-resident; or

No business connection shall be deemed to have been established, if the business is carried on through an independent broker, general commission agent or any other agent (i.e., broker or commission agent who is not working mainly or wholly for such non-resident or other non-resident under same management), provided such person is working in his ordinary course of business. Only so much of income which accrues or arises due to such business connection is deemed to be income accruing or arising from India and not the entire income of the non-resident.

The initiation taken includes the BEPS Action Plan 7 that brought before modifications to Article 5(5) that at the moment states that an agent would not only include a person who habitually concludes a contract on behalf of a Non-Resident, but also a person who usually plays a principal role leading to the conclusion of agreements. The recommendations under BEPS Action Plan 7 has been included in Article 12 of the Multilateral Convention to Implement Tax Treaty Related Measure (MLI), to which India is a signatory. Eventually, these provisions will modify India’s respective DTAAs covered by MLI automatically. This would actually broaden the scope than the provisions included by the Indian domestic tax laws.

According to the Indian Government, the scope of business connection has been expanded as defined under the Indian domestic tax laws consistent with Permanent Establishment Rule as amended by the BEPS Action Plan 7 and MLI by introducing the concept of agent habitually playing the significant role leading to the conclusion of a contract. In this context, the contracts are: In the name of the Non-Resident; For the transfer of ownership, or for granting the right to use a property owned by the Non-Resident or for which the Non-Resident has a right to use; Or for the provision of services by that Non-Resident. The amendments in the tax laws of India will align the same with the provision of the DTAA as modified by the MLI to make the requirements of the DTAA effective. Although, it should be noted that since the existing definition of the PE under the DTAAs is narrower than the aforesaid amended definition under the Indian tax laws, therefore, the provisions of DTAAs being far more beneficial than the Indian domestic tax laws would continue to apply to a Non-Resident till the MLI laws come into force.

With effect from April 01, 2018, the Government of India has expanded the scope of Business Connection to include Significant Economic Presence. Under this context, Significant Economic Presence recent shall mean: Any transaction concerning any goods, services or property carried out by a non-resident in India including the provision of download of data or software in India if the aggregate of payments arising from such transaction(s) during the previous year exceeds the amount as prescribed; or Continuous and systematic soliciting of its business activities of engaging in interaction with digitized users as specified, in India through digital means. The BEPS Action Plan 1 on addressing the tax challenges of the digital economy recommended modifying the existing definition of Permanent Establishment to provide that: An enterprise engaged in fully de-materialised digital activities would constitute a PE if it maintained a significant digital presence in another country’s economy; Virtual PE would be constituted when an enterprise maintains its website on a server of another enterprise located in a jurisdiction and carries out its business through that website. The BEPS Action Plan 1 also recommended that countries may introduce the following safeguards in their domestic laws to prevent BEPS: A new nexus rule based on the concept of a significant economic presence. Withholding the tax on certain types of digital transactions. An equalization levy. Earlier the Indian domestic tax laws provided for a physical presence-based nexus rule for taxation of business income of the Non-Resident in India-territorial nexus who is the NRI. Emerging business models such as a digitised business, which does not require a physical presence of itself or any other agent in India, were not covered by the domestic tax laws in India.

APPLICABILITY OF THE LAWS

The amendments which are  mentioned above will apply to all online advertisements, online searches, cloud services and other digital products to ensure that the profits obtained by these firms attribute to the users in India and are taxed in India itself. This could actually bring huge firms such as Google, Facebook, Amazon and Netflix and application developers such as Uber Inc. with huge consumer bases in the country into the tax net. The amendments come at the back of equalisation levy at the rate of 6 per cent imposed from the First of July, 2016, online advertising payments to foreign entities not owning a Permanent Establishment in India. Accordingly, companies that sell goods digitally or execute digital services in India with or without a taxable presence in India may fall within the fields of this amendment. The revenue-based factor and use-based factor approach proposed by the Finance Bill to determine nexus based on the concept of significant economic presence is in line with the Action Plan 1. However, the guidelines on this regard prescribing the conditions and the threshold limits are yet to be issued.